It’s a struggle to provide descriptive content when writing fiction, isn’t it? At least it is for me, although that’s certainly not the case for everyone. For example, John Sandford, the author, doesn’t have that problem.  His prose flies off his fingertips, much like a gifted watercolorist shading stormy clouds and greening fields. I can see his characters. I can practically walk down to the lake at the rustic cabin he describes, and even hear the gentle waves lap softly against the hull of the boat moored at the pier.

It’s different when I write, unfortunately.  In my mind’s eye, every scene lies before me, rich in detail, opulently colored – so much so, that it seems that everyone who reads my words will see the very same things themselves. Therefore, my fingertips skip right past deep descriptions and plod along muddy sentences. The results end up more like Mondrian color-blocked canvases than the richness of a Vermeer painting. Not that I mean to compare my writing to any kind of artistic master at all.  My stuff is more like paint-by-numbers, when it comes to that!

Perhaps the only good thing to take from this is the recognition of a severe deficiency. That at least provides a goal to strive toward – and that gives hope (and change? But we know that seems impossible, don’t we).

They sat in comfortable chairs across from each other, chatting, snug in the house, listening to fat raindrops outside plop steadily onto tropical leaves .

“Yesterday I struggled to remember the next door neighbor’s name before it finally surfaced in my memory,” she said.

“Huh! Stuff like that’s always been a problem for me, and it’s getting worse now,” he commiserated.

“For years I had a mental block against the word hydrangea before I figured a way to dig it out of my brain. Guess I finally laid down a new neural pathway because now I can remember it just fine.” She said it offhandedly, but recalled what a challenge it had seemed at the time.

How do I respond to that?, he wondered, so he simply nodded and shifted his weight slightly from one hip to another comfortable position as she continued to talk.

“In fact, I’ve decided to name my next protagonist Hydrangea…she’ll be one of five sisters, I think, whose mother named them after flowers.” She pushed a graceful hand out toward him, raising one slender finger at a time, giggling as she said, “Rose, Lily, Iris, Daisy, and Hydrangea!”

That’s funny, he thought, and answered, “Hydrangea will ask her mom why her sisters have such short,easy names, don’t you think? And her mom can say ‘you have a complicated name because yours was a complicated birth’.”

They snickered, living the moment and loving each other, while outside the fat raindrops made music in the tropical foliage.

What IS it about the United States? It seems as though everyone and his Uncle Tim tries mightily to cram each and every one of us into some kind of category, as though they themselves will not feel comfortable until their little (or big) pigeonholes have ingested another being. Put in conversational terms, it could go like this:

“That’s right, darlin’, ease in right over there next to that big fella, why don’t ya? I think y’all believe most of what I believe. No, no, I’m sending that guy to another pigeonhole. I can tell he don’t have no idea about what is true or what is real, anyway. I have a SPECIAL place for him and others like him. You know what I mean?”

“No, I DON’T know what you mean. My personal opinion is that most of what you believe is ca ca poule. Besides, the bottoms of your pigeonholes are slimy with crud-o-la. And I LIKE that other dude. Not only does his intellect challenge mine, his ideas are helping me refine my personal philosophy.”

“If you refuse to be pigeonholed, then there must be something dangerous and very wrong with you. You have to accept the inevitable or there will be predictable consequences.”

“Wow!  I’d probably like that.  That would make me pretty special. I wouldn’t have to believe, nor would I have to disbelieve. The atoms and molecules that house my consciousness can do their own thing, and…… Best of all, I could stay out of the slime.

The reiteration of Carl Sagan’s original series on the Cosmos has me hooked.  I wait eagerly from one week to the next until the next program airs.  The graphics are stunning, and Neil Tyson, the astrophysicist, is great in his job as the apologist (if you can call him that in this context).

Why am I enjoying this so? For one thing, it is a refresher course of scientific history that hearkens to man’s earliest curiosity about the world(s) we inhabit. The program telescopes the centuries of discovery in a way that allows us to marvel about how a few men’s ideas lead other men to hypothesize about greater ideas and grander theorems.

Much of the program is understandable by nearly everyone, but there are tiny bits that provoke thought in even those who have already scratched the surface of astrophysics.

As I watch and listen, I think of the creationists I know, one of whom insists that Earth and the living organisms on it is no more than 6,000 years old. I doubt any of them bother to watch Cosmos, but if they did, the suppositions would probably horrify them as terrible blasphemy.

What I finally take away with awe from each consecutive airing of the Cosmos is that, regardless of one’s position in regard to the universe and humanity’s position in it, the program reaffirms each person’s beliefs. Yet another paradox for believers and nonbelievers… 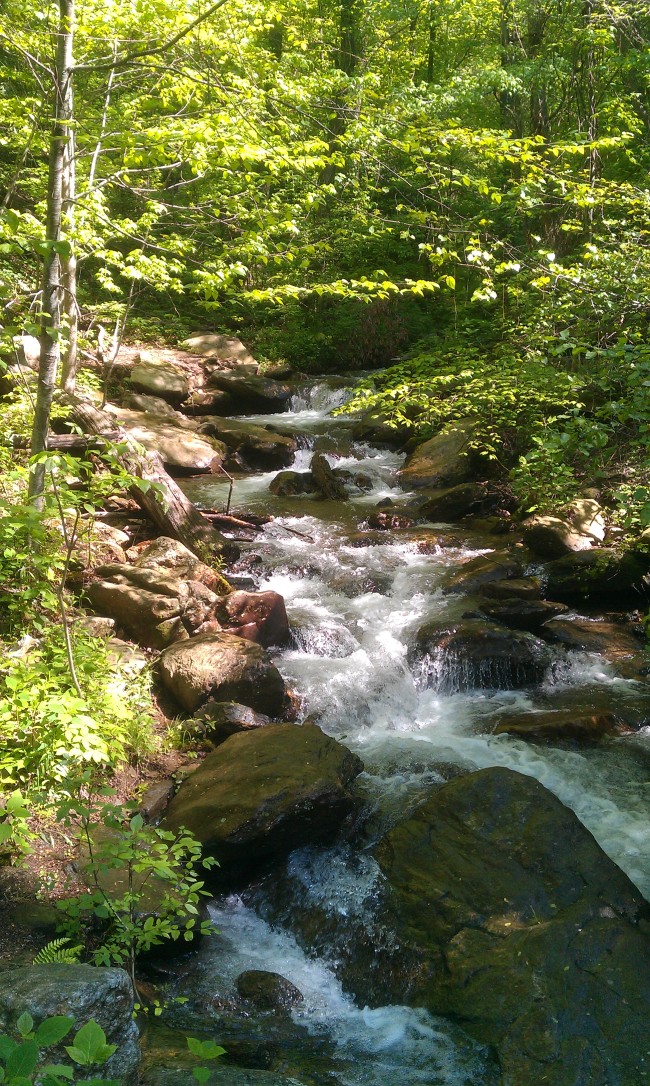 Now that I’ve reminded myself this morning of the peacefulness of springtime mountains, the smell of mossy rocks, and the soothing sounds of burbling brooks, my breathing has slowed, my shoulders have relaxed, and creative thoughts flow easily, unblocked. Similar to the consciousness expressed in the book SIDDHARTHA, words and sentences now glide past the boulders and branches embedded in my brain.  Thoughts move my fingers on the keyboard. The tactile smoothness and springiness of the keys add to the rhythm of my thoughts.  Ah, yes – today is a good day to be a writer.